Genevieve Jacobs on the role of the media in Australia

By Jeremy | Past Forums, Uncategorized

Article by Katy Nichols, Christians for an Ethical Society, Board Member 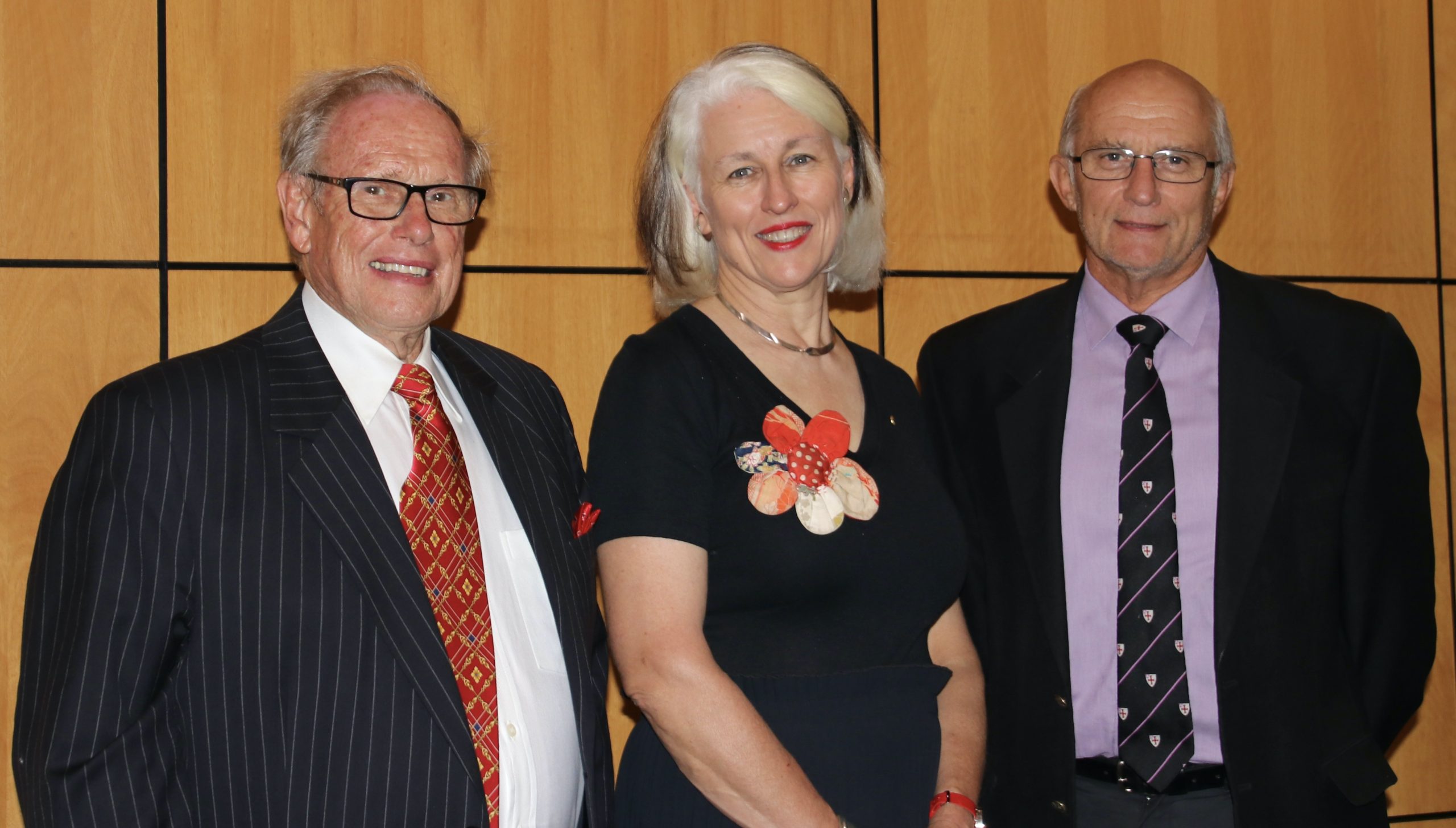 Genevieve Jacobs AM, speaker at Christians for an Ethical Society dinner, with co-chairs Clive Rodger (L) and Stephen Pickard (R)

Media matters n0w ever more than now, Genevieve Jacobs AM, Group Editor of Region Media, told the attendees of the Christians for an Ethical Society annual dinner on 15 March 2022. Her talk, which also told us much about her own history and love for what is good, true and beautiful, covered two key issues: why should we care about the media and what should we do about it.

Why should we care about a strong and independent media?

Of greatest relevance to her audience, she stressed the bearing independent news has on our capacity for ethical decisions. Critically, independent media is a vehicle for truth-telling, and all thoughtful people need truth and a variety of voices, as no-one owns all the truth

She invited us to imagine a future without strong media – important court cases would not be reported (for example Mabo, or more recently Bernard Colleary), government budgets would go unchallenged, information on disasters and recovery would be limited, and false news would be promulgated by governments and other sources.

A quick survey of risks to a strong independent media and reasons for the decline in trust in journalism (apart from the commonly known issues of changing platforms and revenue), included evidence of confusion between fact and opinion (many people do not know what an editorial is); and that a better knowledge of the focus of readers (people read politics and sport much less than thought) leads to a temptation to write for click bait.

Truth and information gathering is difficult and costly, and no one funding style one size fits all media. Despite multiple government inquiries into the media, there is only modest funding for independent media: she noted she worried about a future funded by Facebook, Google and government grants.

We were reminded that it was important to have a diversity of voices: the tendency for an echo chamber in social media means that people become used to only hearing one story, and consequently push for exclusion of alternative points of view. President Trump may have made an art form of transforming “news I don’t like” into “false news”, but many people are objecting to voices they don’t like being given an airing – such as the recent objection to an interview with Zachary Rolfe.

What we should do about it?

Ms Jacobs told us that free independent media is driven by the need to tell the truth, but this takes great courage. At its extreme, it can lead to death, and we were reminded of a number of murdered journalists through decades and across the world.

We need to appreciate that independent media is a fundamental function of free society – and the ‘boring’ stuff not covered by social media is often critical to keep the community informed.

We were urged to defend independent and local media strongly, through engaging robustly with it and supporting it. We were urged to appreciate the variety of voices out there and read a wide range, including those we disagree with. Finally, we were encouraged to engage with it intellectually – to think about what the platform is trying to say, and why, not simply to dismiss the report if we disagree.

Christians for an Ethical Society (ces.org.au) is a Canberra-based ecumenical forum which seeks to engage with the ethical challenges of the contemporary world, locally, nationally and internationally.  Our next forum will be on 18 May 2022: Tom Henderson-Brooks on Christ, Compassion + Context – following the Christ who calls us to live compassionately in our changing context.

Genevieve Jacobs AM is the Group Editor for Region Media, Australia’s fastest growing digital news platform. Genevieve chairs the ACT arts minister’s Creative Advisory Council and co-chairs the ACT Reconciliation Council. She sits on the boards of the Cultural Facilities Corporation, the National Folk Festival and is chair of the Canberra International Music Festival. She is also a director of the Conflict Resolution Service and the Australian Centre for Christianity and Culture. She was made an AM in the Australia Day honours list for her service to public broadcasting and the community. Genevieve has an enduring interest in building community engagement, and is a partner in the family farming enterprise.

Pilgrimage of Justice and Peace in Solidarity with Our First Nations 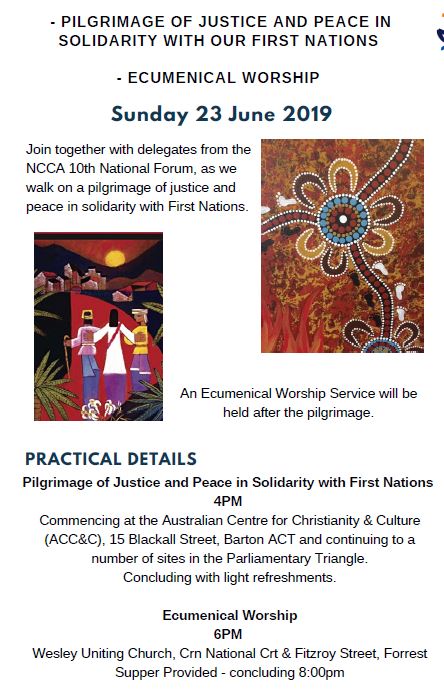 Upcoming Events from the ACC&C

Week of Prayer for Christian Unity 2019 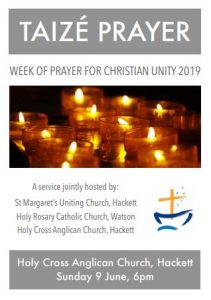 A service jointly hosted by:

The Insult, Distributed by Palace Films

As part of National Reconciliation Week, the Australian Centre for Christianity and Culture will be hosting a film screening of the movie The Insult which demonstrates reconciliation and forgiveness in a powerful and compelling way. Distributor Palace Films states:

The internationally acclaimed new film from multi award-winning writer/director Ziad Doueiri, 2018 Oscar-nominee THE INSULT is a thrilling new legal drama centring on a minor disagreement that escalates into a nationwide controversy.

The present day. It’s a scorching hot afternoon in Beirut. Forty-something mechanic Tony already has a chip on his shoulder about Palestinians, so he’s less than welcoming when 60 year-old Yasser, the foreman of a construction crew working on the street outside, asks him to fix the faulty drainpipe on his balcony. Tony closes the door in his face, so Yasser replaces the pipe anyway, only for Tony to smash it to pieces. Passions boil over, each man digs in, and what should have been a trivial incident easily shrugged off escalates quickly into a dispute that reverberates through their families and communities. Eventually lawyers are called in and the men find themselves in the centre of a highly publicised trial – one that reopens historical and personal wounds on both sides.

Widely heralded at the Venice, Telluride and Toronto Film Festivals, Doueiri’s gripping and revealing film is reminiscent of such masterful socio-political dramas as A Separation and Incendies, daring to lay bare the divisions within contemporary society. Expertly depicting the shifting conflicts that take place within homes, neighbourhoods and in the courtroom, this thrilling and superbly performed moral fable serves as both a smart and thought-provoking piece of entertainment, and a deeply affecting plea for empathy and conciliation.

Federal Election 2019: Where do the main parties stand on refugee policy? 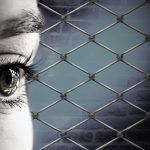 With the federal election fast approaching,  the Refugee Council of Australia’s Choose Humane campaign has released a detailed comparison of where the three main parties stand on issues relating to refugees, including:

The Choose Humane campaign is working to achieve humane policies for people seeking asylum. For more information about their platform, visit their website.

Public Forum: Governance for our Church – Out of hope, not fear 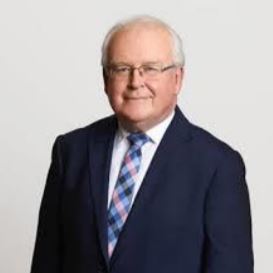 Exploring the lessons of the Royal Commission and beyond for the future governance, leadership and culture of the Catholic Church

Robert Fitzgerald AM, former commissioner on the Royal Commission into Institutional Responses to Child Sexual Abuse is guest speaker at Concerned Catholics Canberra Goulburn’s next public forum to be held in Canberra on 16 April.  All are welcome. Supper provided.

29 May 2018:  “Springs of Hope: rethinking the vertical”, Elizabeth Farrelly

By Jeremy | Uncategorized | No Comments 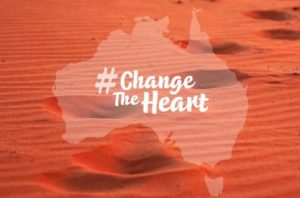 Join us in Canberra at the Australian Centre for Christianity and Culture at a prayer service regarding the 26th of January.

During this service an offering will be taken up to support Aboriginal and Torres Strait Islander Christian ministry through the Grasstree Gathering www.grasstreegathering.org.au.  Please consider how you can support this ministry.

3 May 2017: Defiant earth: The fate of humans in the Anthropocene, Clive Hamilton

17 August 2017: “The Getting of Wisdom – a Private Faith, a Public Christian”, Kristina Keneally (Annual dinner forum)

15 November 2017:  “Diversity and Harmony:  Peace and Justice in the 21st Century” – A Muslim-Christian Conversation